A lot of times when I tell people what I do, they ask me right back “Is Pilates the same as Yoga?”, “What kind of workout is it?”, or even “Does it involve jumping?” Over time I realized that not a lot of people know what really Pilates is and where this form of exercise came from. So let’s get into a bit of history of Pilates and see what are the basic principles and benefits of this type of fitness.

Where Pilates Came From?

Joseph Pilates developed this form of exercise in early 1900’s and since then Pilates evolved and has entered the fitness mainstream about a decade ago and has been going strong ever since.

As a child, Joseph had a poor health and suffered from asthma and other ailments. He turned to exercise and athletics to battle these ailments and was always studying various exercise regimens to expand his knowledge base. He tried to develop his own exercise system based on balance in body, mind, and spirit. Growing into adulthood, Joseph was no longer the sickly child he had once been as he became an avid skier, diver, gymnast, and boxer.

In 1912 Joseph went to England, where he worked as a self-defense instructor for detectives at Scotland Yard. At the outbreak of World War I, Joseph was interned with other Germans at a camp in Lancaster, England. During his internment, he refined his ideas and trained other internees in his system of exercise. This was the time when he attached springs to hospital beds to add resistance to his exercises. This was a prototype for Pilates equipment, specifically Cadillac and Reformer.

In 1926 Joseph moved to New York, United States where he opened his first fitness studio. His form of fitness attracted a number of dancers and later on a lot of young ballerinas from the New York City Ballet were using Pilates to excel in their profession.

How Can You Benefit? 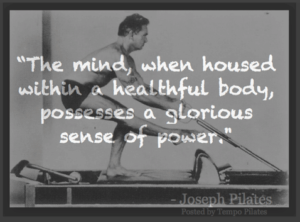 From then Pilates ideas and movements to connect mind and body, create strength and symmetry in the body were taken on by many different organizations. True Pilates sessions should focus on breathing and coordinating breath with movement, creating length and strength in the muscles, improving posture and flexibility.

By taking classes you will experience better mind/body connection, loosing inches around your waste line, strengthen your core, improve balance and mobility in spine and joints. It’s a great form of exercise for both men and women.